Back to Management Team 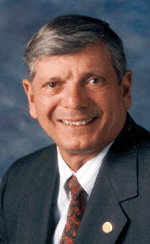 Alan Yassky, is a native of Rockland County. In 1964, he and his wife Jean founded Rockland Realty. He has been a Realtor® since 1963.

On the local level, Alan was president of the Rockland County Board of Realtors® in 1976, having previously held all of the elected seats of that organization. He also served as chair of the board’s Membership, Legislative, Education, and Nominating Committees. He has also been an officer and director of the Rockland County Multiple Listing System.

Active in the community, Alan is past president of the Spring Valley Rotary Club and has been a director of the Rockland Cancer Society and the Rockland Housing Coalition. He is past chairman of the Clarkstown Industrial Commission and a member of the M&T Bank Advisory Committee.

In 1983, he was named Rockland County Business Man of the Year. After many years of service on the board of the Rockland Economic Development Agency, a quasi-public agency dedicated to creating and retaining jobs and business in the community, the agency elected him Director Emeritus in 2001.

Alan is no longer involved with day-to-day activities of the business, giving that responsibility to his children, Steven and Laura. Alan’s wife, Jean, passed away in 2008 years ago after 52 years of marriage. They have four children and eight grandchildren. He has lived in Tuxedo Park, NY for the past 30 years.